Behind the Scenes of the Premiere Women On the Move Show! 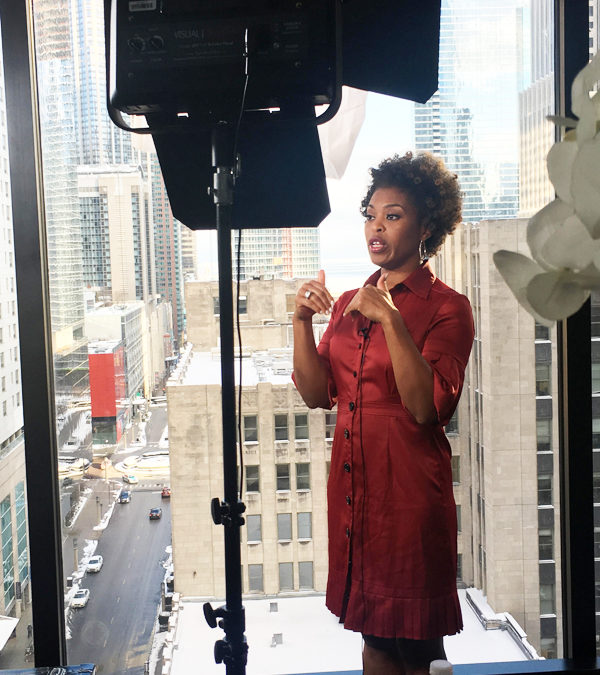 What a wonderful time it was taping the premiere show of Women on the Move in Chicago. Women on the Move is a nationally syndicated television show that features inspirational women doing great work in the world and their communities (check your local listing for the airing information in your city). The location for the premiere show was on the acclaimed Michigan Avenue in a skyscraper overlooking the city’s most iconic sites. What a blessing it has been to be chosen for such an amazing opportunity and how divinely orchestrated it is to have such lovely people involved with the show.

The image of the cameraman and myself was taken while we were trying to catch the right amount of light coming through the glass walls. I am practicing the script in my head as making sure I had all my lines down was no small feat. But everyone was so kind and helpful to me that day. There was such an amazing energy in the air! Many people have wondered how I was chosen for the show. I was selected after being featured as one of the inspirational women. It is as I tell my clients all the time.

If you do not emerge out in the world, no one will even know that you exist.

Had I not been busy doing my work, out on my Revenue Revolution Tour, I would have never been featured as a woman on the show and thereby become a part of it. Being the ultimate foodie (eating good food is one of the greatest joys of my life), it has been such a joy eating at some of the lovely restaurants in Chicago and seeing some of the amazing sites of the city. I will share my favorite food in Chicago and things to do there in a later post.

I am so excited about all to come from Women on the Move and grateful to have it as a part of my journey.

Wishing all the fathers out there a blessed and wonderful Father's Day!#HappyFathersDay ... See MoreSee Less